The Outstanding Officer Award is given to an officer on the NDSA Executive Team that the General Assembly believes has gone above and beyond expectations in service to the NDSA and the students of North Dakota.

Faith Wahl is a Junior at the University of North Dakota double majoring in Business Management and Interdisciplinary Health Studies. During her time as Vice President of Communication, Faith chaired the Student Affairs Committee (SAC) and led several diversity and inclusion initiatives throughout the state. She also worked to increase dual credit opportunities for students and testified to the ND state legislature. When the NDSA executive team had an opening for the Chief Administrator, Faith stepped into the additional role for the team before it was filled. 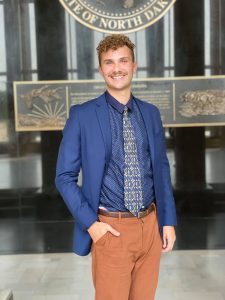 The Most Dedicated Delegate Award is given to the NDSA Delegate that the General Assembly believes has been the most committed to the organization throughout the academic year.

Christian Walth is a Junior double majoring Political Science and Strategic Communication at North Dakota State University. Serving as a first time delegate for the NDSA, Christian dove headfirst and become one of two diversity and inclusion directors. Through this position, he gained inspiration to push for more diversity and inclusion resources, and directors throughout the state of North Dakota. He also helped write resolutions in support of the Juneteenth Bill,  against the transgender athlete bill, and sent several letters to the governor to support the students’ decisions on legislation, and recruited numerous members from around his college to get involved in the NDSA. In addition, Christian brought both energy and commitment to the organization during an unsettling pandemic with virtual meetings, inspiring other delegates to not only attend the conference, but to enjoy it as well.

The Student Advocate Award is given to any individual – student or non-student – that the General Assembly believes has made a significant, positive improvement to higher education in North Dakota during the academic year. 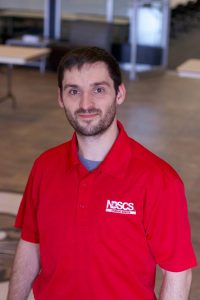 The NDSA Legacy Award is given to a student graduating from the North Dakota University System who will not be able to vote in future meetings. The General Assembly must believe that this delegate has made a powerful, positive, and reoccurring contribution to the students of North Dakota and higher education throughout their time at the NDSA.

Kevin Gilgallon graduated from NDSCS last May with an Associate’s in Applied Diesel Technology. He also graduated from Minot State University in 2017 with a Bachelor of Science in Finance. He briefly served as the SAC chair during his sophomore year there, and served as Minot State’s head delegate for 2 years. At NDSCS, he was busy with internships his first year. During his second year, he became the NDSCS Vice President of Student Senate which serves as the head delegate for NDSCS.